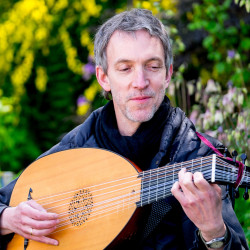 The American-born lutenist Jacob Heringman studied with Jakob Lindberg at the Royal College of Music in London, and later with Pat O’Brien in New York.

Based in England since 1987, he has established himself as one of the world’s most respected and most innovative solo lute players, and as a much sought-after ensemble player performing regularly throughout Europe and North and South America, and making many CD and radio recordings of medieval and renaissance music with leading English ensembles, including The Rose Consort of Viols, Fretwork, Musicians of the Globe, The Kings Singers, The New London Consort, Virelai and The Dufay Collective.

As a continuo player, Jacob Heringman performed and recorded with The King’s Consort, The English Baroque Soloists, The Parley of Instruments and The Taverner Consort, among others. In 1993, he left the continuo circuit to focus on renaissance solo and ensemble projects.

Jacobs playing is also to be heard on the soundtracks of many Hollywood films (most recently, Harry Potter III and Kingdom of Heaven), and occasionally on pop albums (most recently, Joni Mitchell’s Travelogue).