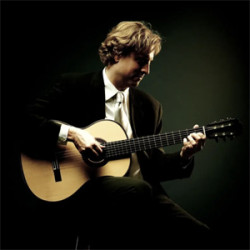 Jason Vieaux is described by NPR as “perhaps the most precise and soulful classical guitarist of his generation”. After 25-plus years of international appearances at major festivals and concert series, and as soloist with over 100 orchestras, Vieaux is one of the world’s leading guitarists. His Grammy-winning solo album Play was noted as “part of the revitalized interest in classical guitar.”

Vieaux recorded Four Paths of Light, dedicated to him by Pat Metheny, for his 2021 album, Road To The Sun. Jason’s passion for new music has also fostered premieres from Jeff Beal, Vivian Fung, Pierre Jalbert, Jonathan Leshnoff, and many more. Vieaux holds faculty positions at Curtis Institute of Music and Cleveland Institute of Music. He plays a guitar by Gernot Wagner made in Frankfurt in 2013.