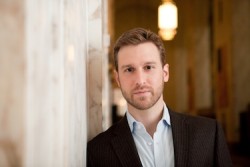 His 2014-2015 season included a European concert tour with Boston Early Music Festival, a U.S. concert tour with Apollo’s Fire, and debuts with Atlanta Opera and Hawaii Opera Theatre. In 2013-2014 he debuted with Kentucky Opera and Opera Omnia, and returned to Minnesota Opera as Papageno in The Magic Flute. Jesse has given the world premieres of Ricky Ian Gordon’s Green Sneakers, Lisa Bielawa’s The Lay of the Love and Death, Conrad Cummings’ Positions 1956, and Tom Cipullo’s Excelsior. He also works closely with several other renowned composers as a member of the Mirror Visions Ensemble.

Jesse has been featured on a dozen commercial recordings, including the 2014 Grammy-winning Charpentier Chamber Operas with Boston Early Music Festival. He has been recognized in several competitions, and was awarded Third Prize at the 2008 International Robert Schumann Competition in Zwickau, becoming its first American prizewinner in over thirty years. Jesse received a Master of Music degree from the University of Cincinnati College-Conservatory of Music, and received undergraduate degrees in History and Music from the University of Michigan. Jesse is also the founder and artistic director of Five Boroughs Music Festival, which brings chamber music of many genres to every corner of New York City.