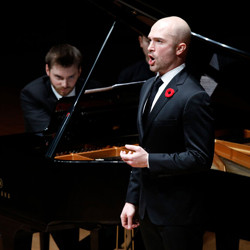 Grammy Award winning baritone John Brancy and pianist Peter Dugan, host of NPR’s From the Top, have been redefining the art song recital since making their critically acclaimed debut of A Silent Night at the Kennedy Center in 2014. That program, which was hailed by The Washington Post as “so refreshingly, marvelously different,” pays homage to the centennial of World War I through the music of composers who lived through, fought in, and died in the Great War. Since then, Brancy and Dugan have given recitals presented by Carnegie Hall, Chamber Music Society of Palm Beach, St John’s College, University of Chicago, Société d’art vocal de Montréal, and more. Together they won First Prize at the 2018 Montreal International Music Competition and Second Prize at the 2017 Wigmore Hall International Song Competition. Both artists maintain lively and unique individual careers.

Brancy is a frequent soloist with the Boston Symphony, and his opera work includes performances in Yuval Sharon’s production of Meredith Monk’s Atlas with the Los Angeles Philharmonic, as Mercutio in Gounod’s Romeo and Juliet under the baton of Lorenzo Viotti, and as the title role in the Boston Modern Opera Project’s production of Tobias Picker’s Fantastic Mr Fox, a performance which won the Grammy for Best Opera Recording.

Dugan’s work as a soloist has included performances and an album with Michael Tilson Thomas and the San Francisco Symphony, as well as appearances with the Houston Symphony and New World Symphony. He is a frequent recital partner of violinists Joshua Bell and Charles Yang, and his work as multi-genre artist has included collaborations with Jesse Colin Young and Glenn Close. Dugan is a Yamaha Artist.

Brancy and Dugan met as students at the Juilliard School. As collaborative partners, they are committed to reenergizing and reinventing the approach to art song. Their repertoire ranges from the classic song cycles of the 19th century to original arrangements of the American Songbook and modern popular tunes.

Brancy and Dugan are co-creators of Operation Superpower, a superhero opera that encourages children to use their talents – their real-life superpowers – to do good in the world.