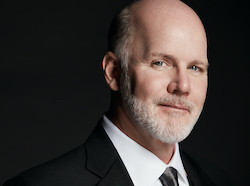 Bass-baritone Kerry Wilkerson made his Carnegie Hall debut to rave reviews in June 2017 as baritone soloist in the Vaughan Williams Sancta Civitas. A resonant singer with unique evenness in register, the Washington Post has described him as an ‘exuberant’ performer having a ‘smooth and dignified’ tone. He retired from military service in July of 2018 after an esteemed career as a military vocalist. He first served with the professional chorus of the United States Air Force, The Singing Sergeants (1989–98), then with the United States Army Chorus (1998–2018).

Over the course of his 29-year military career, he performed in many of the most prestigious concert halls throughout the United States and Canada. He has also sung for world leaders, Supreme Court Justices, and politicians and dignitaries from around the world during official ceremonial and protocol events in Washington, DC. Kerry sang with the critically acclaimed Robert Shaw Festival Singers, most notably at Carnegie Hall on numerous occasions, as well as at the memorial service of Mr. Shaw at Atlanta Symphony Hall. He currently enjoys an active career as a concert soloist, recitalist and teacher.