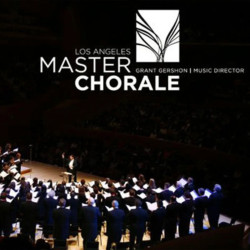 The Los Angeles Master Chorale is the “the finest-by-far major chorus in America” (Los Angeles Times) and a vibrant cultural treasure. Hailed for its powerful performances, technical precision, and artistic daring, the Chorale is led by Grant Gershon, Kiki & David Gindler Artistic Director; Associate Artistic Director Jenny Wong; and President & CEO Jean Davidson. Its Swan Family Artist-in-Residence is Reena Esmail.   Created by legendary conductor Roger Wagner in 1964, the Chorale is a founding resident company of The Music Center and choir-in-residence at Walt Disney Concert Hall. Chorister positions are highly sought after, and the fully professional choir is a diverse and vocally dynamic group.

The Chorale reaches over 175,000 people a year through its concert series at Walt Disney Concert Hall, its international touring of innovative works, and its performances with the Los Angeles Philharmonic and others.

The Chorale’s discography includes the Los Angeles Philharmonic’s Deutsche Grammophon recording of Mahler’s Symphony No. 8, for which the Chorale won a Best Choral Performance Grammy with the National Children’s Chorus, Los Angeles Children’s Choir and Pacific Chorale. The Chorale released The Sacred Veil by Eric Whitacre on Signum Records in 2020. Under the direction of Grant Gershon, the Chorale has released eight recordings, including national anthems / the little match girl passion by David Lang on Cantaloupe Records. The Chorale is on the soundtracks of many major motion pictures, including Star Wars: The Rise of Skywalker and Disney’s Jungle Cruise.

Throughout 2018 and 2019, the Master Chorale toured its production of Lagrime di San Pietro, directed by Peter Sellars, earning rave reviews across the globe. Süddeutsche Zeitung called the 2019 Salzburg Festival performance “painfully beautiful,” while the Sydney Morning Herald praised Lagrime di San Pietro as “stunning … Their voices soared to the heavens.” After the Master Chorale performed in London, The Stage called Lagrime a “balm for the soul.”

Committed to increasing representation in the choral repertoire, the Chorale announced in 2020 that it will reserve at least 50% of each future season for works by composers from historically excluded groups. This commitment to inclusion runs through the entire organization, which recently ratified a five-year plan that commits to improving representation at the staff and board levels, continuing to build a more diverse roster of singers, and reaching a wider audience.

The Chorale’s education programs include Voices Within residencies that encourage students to write and perform their own songs, and an expansive Oratorio Project for high school students. The Chorale also presents an annual High School Choir Festival, which brings teenagers from around the Southland to perform in Walt Disney Concert Hall. In May 2019, the High School Choir Festival celebrated 30 years as one of the longest-running and widest-reaching arts education programs in Southern California. In July 2018, the Chorale presented Big Sing California, the largest group singing event in state history, encompassing a concert in Disney Hall that was broadcast live to venues in five other cities in California and livestreamed online.