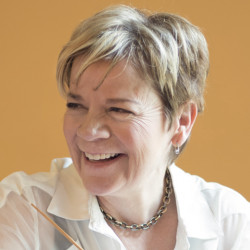 In 2021, Alsop became Music Director Laureate and OrchKids Founder at the Baltimore Symphony Orchestra. Appointed in 2020 as the first Music Director of the National Orchestral Institute + Festival (NOI+F), she will lead a newly formed conductor academy and conduct multiple concerts each

June with the NOI+F Philharmonic. In 2019, after seven years as Music Director, Alsop became Conductor of Honour of Brazil’s São Paulo Symphony Orchestra (OSESP), where she continues conducting major projects each season.

Alsop has longstanding relationships with the London Philharmonic and London Symphony orchestras, and regularly guest conducts such major international ensembles as the Cleveland Orchestra, Gewandhausorchester, Filarmonica della Scala, Orchestra of the Age of Enlightenment, Budapest Festival and Royal Concertgebouw orchestras.

The first and only conductor to receive a MacArthur Fellowship, Alsop has also been honoured with the World Economic Forum’s Crystal Award and made history as the first female conductor of the BBC’s Last Night of the Proms. Amongst many other awards and academic positions, she serves as 2020 Artist-in-Residence at Vienna’s University of Music and Performing Arts, is Director of Graduate Conducting at the Johns Hopkins University’s Peabody Institute and holds Honorary Doctorates from Yale University and the Juilliard School. In 2002 she founded the Taki Concordia Conducting Fellowship, which was renamed in her honour as the Taki Alsop Conducting Fellowship in 2020.