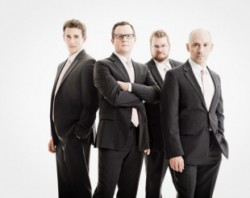 Praised for a “rich, natural sound that’s larger and more complex than the sum of its parts,” (National Public Radio) New York Polyphony is regarded as one of the finest vocal chamber ensembles in the world. The four men, “singers of superb musicianship and vocal allure,” (The New Yorker) apply a modern touch to repertoire that ranges from austere medieval melodies to cutting-edge contemporary compositions. Their dedication to innovative programming, as well as a focus on rare and rediscovered Renaissance and medieval works, has not only earned New York Polyphony critical acclaim, but also helped to move early music into the classical mainstream.

The ensemble’s growing discography includes two GRAMMY®-nominated releases and albums that have topped the “best of” lists of The New Yorker, Gramophone, and BBC Music Magazine. Their Avie Records releases, I sing the birth (AV2141) and Tudor City (AV2186) received widespread critical acclaim.

New York Polyphony’s debut album I sing the birth was released in 2007. An intimate meditation on the Christmas season, the disc garnered unanimous praise. Gramophone named it “one of the season’s best,” BBC Music Magazine selected it as ‘Editor’s Christmas Choice’, and Classic FM Magazine (UK) deemed it “a disc for all seasons.”