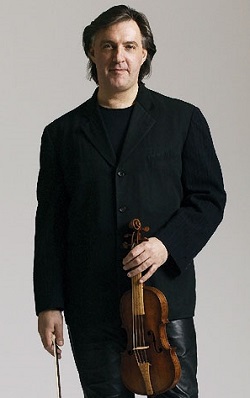 The Irish/Ukrainian violinist Pavlo Beznosiuk is one of the most versatile musicians working on the early music scene today. He has been described as an artist with ‘star quality’ whose ‘playing is full of fantasy’ and ‘whose range of ideas seems every time more amazing’. A rare performer who is equally at home on instruments as diverse as modern, Classical, Baroque and Renaissance violins, viola and Mediaeval fiddles, he has been praised for his versatility and virtuosity.

Pavlo Beznosiuk’s extensive list of recordings is a testament to his popularity as one of the field’s outstanding players. They include all of the solos in the six Brandenburg Concertos with the New London Consort, Vivaldi’s Op. violin concertos with The AAM and Christopher Hogwood (Decca), Mozart’s Sinfonia Concertante and Haffner Serenade (Virgin/EMI and Erato), and much feted recordings of the Schubert Octet and Cherubini string quartets with the ensemble Hausmusik. His world premiere recording of music by J. J. Walther and J. P. von Westhoff was released to great critical acclaim, as was his recording of Biber’s Rosary Sonatas for Avie. These and his innumerable TV and radio broadcasts for the BBC and other European stations have established his pre-eminence in the field of early music. He teaches Baroque violin at the Royal Conservatory in the Hague.