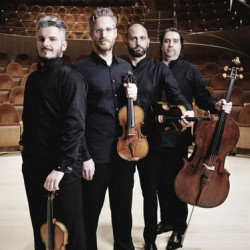 Since its formation, the Quartetto di Cremona has established a reputation as one of the most exciting chamber ensembles on the international stage, regularly invited to perform in major music festivals and concert halls in Europe, North and South America, and the Far East for its high level of interpretive artistry. Recipient of the “Franco Buitoni Award – 2019” for its constant contribution to the promotion of chamber music in Italy and around the world, in 2020 the ensemble celebrates the first 20 years of its career with several special projects, including an international tour with Bach’s The Art of the Fugue, a new CD release, and music expressly composed for the Quartet. Further 2020/21 season highlights include concerts in Geneva, Istanbul, Milan, Rome, London (Wigmore Hall), Kuhmo, Taipei and debuts at Carnegie Hall in New York and at the Rudolfinum in Prague. Noteworthy recent recording projects include a double CD dedicated to Schubert, recorded with the Stradivarius set of instruments named “Paganini Quartet”, on kind loan from the Nippon Music Foundation (Tokyo). The members of the quartet are professors at the “Walter Stauffer” Academy in Cremona since 2011, and the Quartet is frequently invited to present masterclasses worldwide. The ensemble is ambassador for the international project “Friends of Stradivari”.