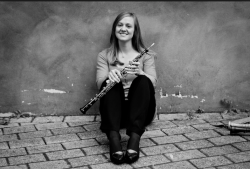 Rachel Chaplin works with many of the leading period instrument ensembles in the UK, including the English Baroque Soloists, Orchestre Révolutionnaire et Romantique, The King’s Consort, Classical Opera Company and Orchestra of the Age of Enlightenment. With these and other groups she has performed and recorded numerous works on French and German oboes from the eighteenth, nineteenth and early twentieth centuries.

Rachel is a graduate of Christ’s College, Cambridge, where she obtained a Starred First Class BA degree, and of the Royal Academy of Music, where she studied modern oboe. She studied for a year in Leipzig with Christian Wetzel on a prestigious DAAD scholarship and completed her doctorate as an AHRC scholar at the Royal Academy of Music. Her academic specialism is eighteenth century German music, particularly the instrumental music of Carl Philipp Emmanuel Bach, which was the subject of her doctoral research. Formerly a lecturer and tutor at the Royal Academy of music, Rachel continues to be involved with music education, lecturing at public events and participating in orchestral projects with schools and community groups. She lives in London with her husband, Sam and their three young daughters.