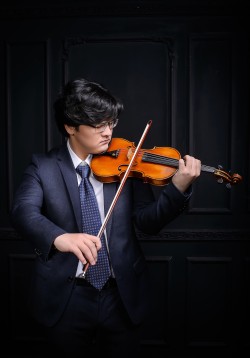 Kazakh violinist Sherniyaz Mussakhan is a Cavalier of the Order of Daryn (2017) and a winner of his country’s Independent ‘Tarlan’ Prize.

A graduate of the Moscow Central Music School, Mussakhan pursued further studies at the Haute École de musique de Lausanne under Pavel Vernikov and earned a Solo Master’s Diploma from the Musik Akademie Basel, where he studied with Rainer Schmidt.

He has been a prizewinner in the Moscow International David Oistrakh Violin Competition and at the Lipinski and Wieniawski International Competition for Young Violinists in Poland and has also been awarded the Kiefer Hablitzel Prize (2014 and 2017), Concours Nicati Prize (2017) and Rahn Musikpreis (2018).

From May 2015, he has served as Artistic Director of the Eurasian Soloists Chamber Orchestra and performed with them throughout Europe. Together they participated in the Sion Music Festival (Valais) and in 2016 were invited to be artists-in-residence at the Gstaad New Year Music Festival and Stars at the Rhine Festival (Basel).  As a soloist, Mussakhan has performed with the Royal Philharmonic Orchestra of London, Basel Symphony Orchestra and Astana Opera Symphony Orchestra. He made his debut at the Menuhin Festival Gstaad in 2018 and has appeared at venues including the Bolshoi Theatre, Mozarteum Salzburg, Hofburg Vienna, Mariinsky Theatre and the Great Hall of the Moscow State Conservatory.