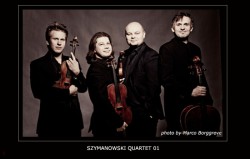 Founded in Warsaw in 1995, the Szymanowski Quartet has developed into one of the most charismatic string quartets of the younger generation. In May 2001 it was selected by BBC Radio 3 to participate in the New Generation Artists Scheme for the forthcoming seasons, which, in addition to frequent studio recordings for the BBC, included concerts in various BBC series.

Awards at well-known competitions, including the \”Premio Vittorio Gui\” in Florence and the 1997 \”In Memoriam Dmitri Shostakovich\” in Hanover, soon confirmed the extraordinarily high standards of the Quartet. In 1999 it won the audience prize at the International Chamber Music Competitions in Osaka and Melbourne.

The Szymanowski Quartet has performed at renowned festivals such as the Schleswig-Holstein Musik Festival, Würzburg Mozart Festival, Bregenzer and Schwetzinger Festspiele, Niedersächsische Musiktage and the Festivals of Chester, Huddersfield, Luxembourg and Lockenhaus. The Quartet has given concerts in Paris, Lyon, Grenoble and Bremen and also toured Australia.

The Szymanowski Quartet has given debuts at Carnegie Hall in New York, the Perth Festival, the Concertgebouw Amsterdam, the BBC Proms and the Grünewald Hall in Stockholm. It was invited back to perform at London\’s Wigmore Hall, The City of London and Chester Festivals, and concerts in Manchester, Winterthur, Bonn, Hanover and Santiago di Compostela. The Szymanowski Quartet made its debut at the Bath Festival in May 2004.

After its foundation in Warsaw, the Szymanowski Quartet studied in the chamber music class of the Hochschule für Musik und Theater in Hanover, which was founded especially for the Quartet by their teacher and mentor Hatto Beyerle. The Quartet continues to refine its musical skills by participating in master classes with such teachers as Walter Levin and the Amadeus, Emerson, Juilliard and Guarneri Quartets. Since the autumn of 2000, the Szymanowski Quartet has been \”Quartet in Residence\” and teaching chamber music at the Musikhochschule Hanover.

In 2005 the Szymanowski Quartet was awarded the prestigious Polish Karol Szymanowski Award. This was the first time since its foundation in 1996 that the Award was given to a string quartet, recognising its “unique artistry in the interpretation of the music of Karol Szymanowski and for the consistent international furthering of this music.” Previous award winners have included Sir Simon Rattle and the pianist Piotr Anderszewski.

Composers the Quartet has worked with include Magnus Lindberg, Elena Kats-Chernin, Philip Cashian , Andrew Toovey, Thomas Larcher and Deirdre Gribbin, several of whom dedicated their works to the Quartet.