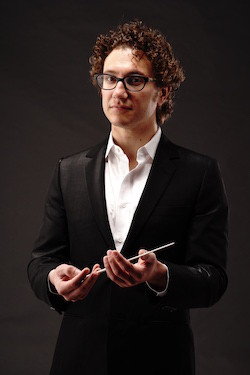 A tireless advocate for the power of music, Abrams promotes interdisciplinary collaboration with organizations including the Louisville Ballet, Oregon Shakespeare Festival, the Speed Art Museum, and the Folger Shakespeare Library.

Abrams moves fluidly across genres from rock to hip-hop, jazz, and gospel to classical. He recently collaborated with Jim James, vocalist and guitarist for My Morning Jacket, on the song cycle The Order of Nature, which they premiered with the Louisville Orchestra in 2018 and recorded on Decca Gold. His rap-opera, The Greatest: Muhammad Ali, premiered in 2017, celebrating Louisville’s hometown hero with an all-star cast that included Rhiannon Giddens and Jubilant Sykes. Abrams’ ground-breaking work with the Louisville Orchestra has been profiled on CBS News Sunday Morning, NPR, and in The Wall Street Journal.

Dedicated to exploring new and engaging ways to communicate with a diverse range of audiences, Abrams co-founded the Sixth Floor Trio as well as GardenMusic, the music festival of the world-renowned Fairchild Tropical Garden in Miami.