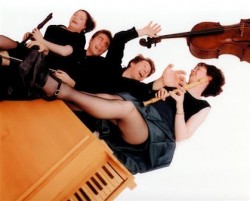 Since its formation in 1998, The Parnassian Ensemble has gained a reputation for its virtuosic performances and innovative programming. It regularly appears at prestigious venues throughout the British Isles such as The Purcell Room and St John’s, Smith Square, London; St David’s Hall, Cardiff and The Fairfield Hall, Croydon. The ensemble also performs for festivals, music societies and museums as well as schools and universities.

Recent appearances have been at the Cobbe Collection of historical keyboard instruments, Hatchlands, Surrey; the Newbury Spring Festival; the Djanogly Recital Hall, Nottingham; the Firth Hall, University of Sheffield and the Totnes Early Music Society, Devon. They have recently accepted their first invitation to perform at St John’s, Smith Square, London.

An unusual feature of its recitals is the introduction to audiences of fine, original, early eighteenth-century English recorder music which would otherwise remain virtually unknown. It was this enthusiasm that led to the recording of their first recording, A Noble Entertainment – Music from Queen Anne’s London 1702-1714 which was on Avie.