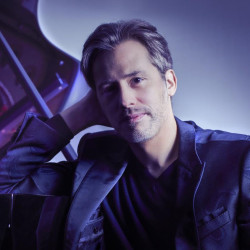 Recognised with the illustrious title of ‘Steinway Artist’, Vincent Larderet has attracted international recognition for the exceptional intensity of his performances. Praised as ‘one of the best pianists of our time’ (Neue Musikzeitung, Germany), for his ‘very lyrical playing’ (Crescendo Magazine, Belgium) and his ‘multi-timbred’ sound (Fanfare, USA), he ‘makes the piano equal to an orchestra’ (Classica, France) with a wide range of ‘fascinating pianistic colours’ (PIANO News, Germany). His very personal and deeply inspired interpretations ‘of utter integrity’ while including a ‘rare melding of the intellectual with the visceral’ (International Piano, UK) are often compared to piano legends such as Arrau, Michelangeli, Pollini, Zimerman and Brendel. Nominated for the ‘International Classical Music Awards’ and ‘Classical Revelation’ by Adami winner at MIDEM in Cannes, he is considered one of the leading French pianists of his generation. Internationally renowned as a Ravel specialist, he worked in Paris with Carlos Cebro, who instilled in him the stylistic and musical tradition of Vlado Perlemuter and studied Ravel’s complete works on Perlemuter’s personal scores annotated during Perlemuter’s collaboration with the composer. He graduated from Lübeck’s Musikhochschule (Germany) with the famous pianist Bruno-Leonardo Gelber and was a prize-winner in several international piano competitions including Maria Canals in Barcelona, AMA Calabria (Italy) and Brest (France). He is also a beneficiary of the ‘Orpheum Foundation for the Advancement of Young Soloists’ in Switzerland.

His performances have been broadcast on major Radio or TV channels. His recordings released by ARS, Chandos Artist Showcase, NAXOS and PIANO CLASSICS have received outstanding international critical acclaim as well as winning many prestigious Awards. He has given the major world premieres of several works by Debussy, Ravel and Schmitt. Mr Larderet is also a co- founder of the Piano au Musée Würth international festival in France which he managed as artistic director until 2017.