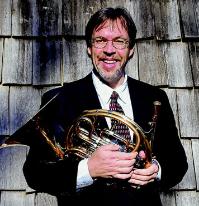 Growing up in Reno, Nevada, Barnewitz was surrounded by some of the world’s great jazz musicians. He was drawn to the French horn after witnessing a London Symphony Orchestra performance of Mahler’s Symphony #3, which begins with nine horns in unison. Barnewitz spent two years studying with Fredrick Bergstone at the North Carolina School of the Arts, and later studied at The Juilliard School. Early in his career, he spent ten years with the Utah Symphony, and also played in the busy recording studios of Salt Lake City. To his credit are over 200 motion picture sound tracks, numerous television productions, commercials, sports, news, and entertainment music.