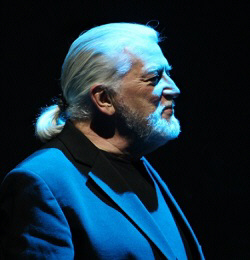 Founder member of Deep Purple, Jon Lord was born in Leicester. He began playing piano aged 6, studying classical music until leaving school at 17 to become a Solicitor’s clerk. Initially leaning towards the theatre, Jon moved to London in 1960 and trained at the Central School of Speech and Drama, winning a scholarship, and paying for food and lodgings by performing in pubs. In 1963 he broke away from the school with a group of teachers and other students to form the pioneering London Drama Centre.

Also in 1963, Jon joined Red Blood and his Bluesicians and acquired his first electric organ. By the next year he occupied the keyboard spot in the seminal Artwoods, led by Art Wood, brother of future Rolling Stone Ronnie Wood. The Artwoods struggled for the next four years, releasing several singles and EPs and a now highly collectible album titled Art Gallery.

During this period, Jon became a much sought after session musician recording with the likes of Elton John, John Mayall, David Bowie, Jeff Beck and The Kinks (eg ‘You Really Got Me’).

In December 1967, Jon met guitarist Richie Blackmore and by early 1968 the pair had formed Deep Purple. The band would pioneer hard rock and go on to sell more than 100 million albums, play live to more than 10 million people, and were recognized in 1972 by The Guinness Book of World Records as “the loudest group in the world”.

Deep Purple’s debut LP “Shades of Deep Purple” (1968) generated the American Top 5 smash hit “Hush”. In 1969, singer Ian Gillan and bassist Roger Glover joined and the band’s sound became heaver and more aggressive on “Deep Purple in Rock” (1970), where Jon developed a groundbreaking new way of amplifying the sound of the Hammond organ to match the distinctive sound of the electric guitar. This invention, which included plugging the organ directly into a Marshall amplifier, became Jon’s trademark sound and made him a pioneer in the use of keyboards in hard rock. The album included “Child In Time”. Its opening motif played on Hammond organ soon ensured the track became Jon’s signature tune.

“Machine Head” (1972) was the band’s biggest and most commercially successful album. It features several rock classics including “Smoke on the Water”, “Highway Star” and “Lazy” all co-written by Jon.

During Deep Purple’s early years, Jon wrote several large scale works for orchestra and rock group including “Concerto for Group and Orchestra” which was premiered, filmed and recorded live at the Royal Albert Hall with Deep Purple and the Royal Philharmonic Orchestra conducted by Sir Malcolm Arnold in September of 1969.

“Gemini Suite” is a 1970 commission from the BBC, which was recorded with the London Symphonic Orchestra again conducted by Arnold, and “Windows” is a 1974 project co-written with conductor Eberhard Shoerner for the Prix Jeunesse in Munich and broadcast live by several European TV-stations.

1975’s “Sarabande” recorded with the Philharmonia Hungarica, conducted by Eberhard Schoerner (with Andy Summers from The Police on guitar) became one of Jon’s most celebrated works with its Eastern tinged and melodic rhythms.

When Deep Purple split in 1976, Jon formed Paice Ashton Lord with drummer Ian Paice and old friend and keyboard player Tony Ashton. They based the band around the two keyboard players and a horn section. However, it was short-lived and only managed one album, “Malice In Wonderland” (1977).

In 1978, Jon joined Whitesnake, adding Hammond organ to the band’s then finished debut album Trouble and staying with the band until 1984. Often referring to Whitesnake as his day job, Jon felt he was largely adding colour (or, in his own words, a ‘halo‘) to round out their blues-rock sound.

Whitesnake became one of UK’s and Europe’s most popular bands, touring extensively on the back of record selling albums and singles, and also gaining great success in Japan. Between 1980 and 1983 a number of Whitesnake’s singles entered the UK charts, regularly taking the now 40-something Jon onto Top of the Pops. He later expressed frustration that the band was not his most creative outlet and this dissatisfaction eventually smoothed the way for the reformation of Deep Purple Mk II. Jon’s last Whitesnake concert was on Sweden’s TV show Mandagsborsen on 16 April 1984.

1982’s “Before I Forget” mixes mainstream rock tracks with very English classical piano ballads sung by Vicki Brown and Sam Brown (wife and daughter of entertainer Joe Brown) and Elmer Gantry. The album features many prominent musicians from Jon’s previous bands and Bad Company, and Jon later picked out “Bach Onto This”, a reworking of Bach’s Toccata as representative of his work at the time.

Jon was also commissioned by Central Television to write the gentle, pastoral soundtrack for the 1984 TV series “Country Diary of an Edwardian Lady”, based on the book by Edith Holden, with orchestra conducted by Alfred Ralston.

During these years, Jon also played on albums by his friends George Harrison (“Gone Troppo“ 1982) and Pink Floyd‘s David Gilmour (“About Face” 1983), Cozy Powell (“Octopuss” 1983), Alvin Lee (“Detroit Diesel” 1986) and in 1985 he made a brief appearance as a member of The Singing Rebel‘s band (which featured Eric Clapton, George Harrison and Ringo Starr) in the film “Water”.

Deep Purple reformed in 1984 with the “Perfect Strangers” album, its title track featuring another stand-out opening motif from Jon’s Hammond, and the band has been recording and touring extensively with great success ever since, as indeed they still do to this day.

Jon’s solo CD “Pictured Within” (1997) showed a return to a more piano-based and gentler style and was released to great critical acclaim. Jon rarely wrote lyrics but he did for the title track and it has developed into a favourite with both his fans and himself. The album was deeply inspired by Jon’s loss of his parents and deals with grief and the feelings connected to loss of loved ones.

In September 1999, Deep Purple revisited Jon’s “Concerto for Group and Orchestra” on its 30th birthday, performing it with the London Symphony Orchestra conducted by Paul Mann at two sold out Royal Albert Hall concerts, recorded and released on CD and DVD to sales of more than 500,000 copies.

Deep Purple then took the Concerto on a 40-date tour of South America, Europe and Japan with a 70-piece orchestra and guests that included Ronnie James Dio.

But Jon felt he was moving in a different direction. ”By 2001 I was beginning to lose sleep, going around and around with the thought that I couldn’t see how to make both things run parallel; that is to stay in Deep Purple and yet have the time to concentrate on and write the kind of music that was more and more in my heart. It was the longest hardest decision of my life, to leave the band I had founded, and had loved for nearly 35 years.”

Jon left Deep Purple after a sold out concert at Ipswich, England on September 19 2002, where the audience chanted his name as the he left the stage. “I’m going to have myself a long and vibrant solo career,” Jon said that night, as he set his sights on fulfilling that promise.

He wanted to focus on his writing and play his solo works. In 2003, he performed “Concerto for Group and Orchestra” at three consecutive nights at the Sydney Opera House and also visited Perth in Australia, and Luxembourg and Norway.

Jon’s next solo CD “Beyond The Notes” (2004) featured collaborations with Sam Brown, who wrote most of the lyrics, including “The Sun Will Shine Again”, which Jon had composed for his good friend Anni-Frid Lyngstad (Frida fromAbba). She later performed the song with Jon on German ZDF television. Elsewhere the album also included “De Profundis”, Jon’s musical homage to his years with Deep Purple as well as tributes to his late friends Tony Ashton and George Harrison.

Jon’s piano concerto “Boom of The Tingling Strings” (the title is a line from Piano, a poem by D.H. Lawrence) was performed in Australia and Europe and recorded by EMI Classics with Nelson Goerner (piano) and Paul Mann conducting Denmark’s Odense Symphony Orchestra. Also included on the resulting CD is “Disguises”, a suite for string orchestra. The CD was released in April 2008 and entered the Classic FM Hall of Fame in 2009.

“Durham Concerto” is another full-scale work for orchestra and soloists. It was commissioned by Durham University for its 175th anniversary and was premiered in October 2007 at Durham Cathedral and broadcast live by Classic FM.

In the week of release, the CD made the top 10 in the UK Classical Album Chart and went on to number 3 in the UK New Release Classical Chart. It also made the top 50 in Amazon’s overall pop chart and no. 3 in HMV’s online Classical Chart. Finally, “Durham Concerto” was the highest new entry in Classic FM’s 2009 Hall of Fame (at no.75, while “Boom of the Tingling Strings” made no.198) – an astonishing achievement for two brand new compositions by a living composer.

In March 2010 Jon released “To Notice Such Things”, a suite for solo flute, piano and string orchestra, inspired by the last line of the Thomas Hardypoem “Afterwards”, that Jon’s good friend Sir John Mortimer used to read when doing live appearances (with Jon frequently accompanying him on piano). Sir John Mortimer died in January 2009 and Jon wrote the piece as a memorial to his departed friend. It was again recorded with the Royal Liverpool Philharmonic Orchestra, conducted by Clark Rundell, with the flute played byCormac Henry. The CD also included “For Example”, Jon’s tribute to Norwegian composer Edward Grieg.

Jon continued to perform all over the world with various orchestras and with vocalists Steve Balsamo and Kasia Laska. Between 2008 and 2011, Jon performed at Arts Festivals as diverse as Lichfield and Shipley in the UK to Plovdiv (Bulgaria) and the Virada Cultural Festival (Brazil). His concert schedule included three nights in Adelaide, Australia, numerous concerts in Germany, two tours of Russia, several concerts at Trondheim’s Nidaros Cathedral in Norway, and visits to Korea, Switzerland, Poland among others.

And as if that wasn’t enough, Jon also found time to play with Nigel Kennedy,Ian Anderson and Rick Wakeman, and record with Anna Phoebe, Steve Balsamo and Kasia Laska.

In 2011, Jon was honoured by a Fellowship of Stevenson College in Edinburgh – after his work with the university’s students in 2009, and was also made Honorary Doctor of Music by his home-town University of Leicester, which, he said, would have sent his parents “dancing in the streets” with pride.

In 2011, while Jon was putting together a definitive studio recording of his iconic “Concerto For Group and Orchestra”, he was diagnosed with pancreatic cancer and stopped touring. His last concerts were the Sunflower Jam on July 8 2011 and a performance of “To Notice Such Things” at the Shipley Arts Festival two days later.

About the new Concerto recording, Jon said: “Over these last years since leaving Deep Purple, I’ve played it over 30 times with different orchestras and conductors all over the world, and, of course, in 2000 I did it well over 30 times with Purple on the Concerto tour, so I’ve been honing the piece live on stage, and I’ve had the opportunity to change things in the score that weren’t sounding quite right. It is therefore a marvelous and exciting prospect to have the definitive recording of the definitive score.” (Jon Lord, May 2012)

On May 15 2012, as part of a year long celebration of Jon’s classical work, Jon’s “From Darkness To Light“ for choir and orchestra, was performed by theHagen Philharmonic Orchestra conducted by Florian Ludwig and broadcast live by German WDR radio.

Happily, Jon got to hear both the first ever radio broadcast of “From Darkness To Light” and the finished studio recording of his cherished Concerto before he passed away on July 16 2012. Jon is survived by his wife Vicky, and daughters Amy and Sara.