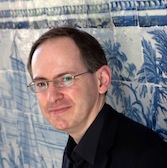 Owen Rees has been Director of Music at The Queen’s College, Oxford, since 1997, and is Professor of Music at the University of Oxford. He is both performer and scholar, his scholarship consistently informing his performances. He also directs the professional vocal ensemble Contrapunctus, which since its foundation in 2010 has released two highly acclaimed CDs and has performed in festivals across Europe. His work as a conductor has taken him to various parts of the world, and he is in demand as a leader of choral workshops. His numerous CD recordings with Queen’s and other choirs encompass a wide variety of choral repertory from the Renaissance to contemporary works, and have attracted consistently high praise, including two nominations for Gramophone awards. He has brought to the concert hall and recording studio substantial repertories of magnificent Renaissance music, particularly from Portugal, Spain, and England, including many previously unknown or little-known works. His interpretations of these repertories have been acclaimed as ‘rare examples of scholarship and musicianship combining to result in performances that are both impressive and immediately attractive to the listener’, and he has been described as ‘one of the most energetic and persuasive voices’ in this field.