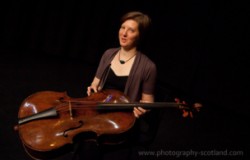 Alison McGillivray was born and brought up in Glasgow. She studied cello at the Royal Scottish Academy of Music and Drama with William Conway and at the Royal Academy of Music with Jennifer Ward Clarke. Based in London since 1994, her career has focused on period instrument performance, with her time shared between the cello and the viola da gamba. She played principal cellist with The Academy of Ancient Music for six years, and now holds the same position with The English Concert. She also works with The Early Opera Company and the viol consort Concordia and during 2000, played both instruments in John Eliot Gardiner’s Bach Cantata Pilgrimage.