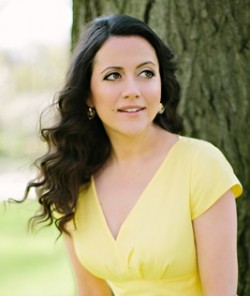 The American soprano Amanda Forsythe sings Euridice on the recording of Charpentier’s La descente d’Orphée aux enfers with Boston Early Music Festival which won the 2015 GRAMMY AWARD for Best Opera Recording. She has been praised by Opera News for her “light and luster”, “wonderful agility and silvery top notes”. She was a winner of the George London Foundation Awards and was sponsored by them in her New York recital début. She also received prizes from the Liederkranz Foundation and the Walter W. Naumburg Foundation.

Amanda Forsythe made her European operatic début in the role of Corinna Il viaggio a Reims at the Rossini Opera Festival in Pesaro which led to an immediate invitation to make her début at the Grand Théâtre de Genève as Dalinda Ariodante where she was proclaimed “the discovery of the evening” (Financial Times). She returned to the Rossini Opera Festival to perform the role of Rosalia L’equivoco stravagante and Bellini duets in the ‘Malibran’ recital at the invitation of Joyce di Donato, and, most recently, Jemmy in the new production of Guillaume Tell for which she received considerable critical acclaim.

Amanda Forsythe made her débuts at the Bavarian State Opera, Munich as Dalinda Ariodante and as Barbarina Le nozze di Figaro at the Royal Opera House, Covent Garden and the Theatre des Champs-Elysées in Paris. She returned to Covent Garden to perform the roles of Manto in Steffani’s Niobe, regina di Tebe under Thomas Hengelbrock and Nannetta Falstaff under Daniele Gatti, described by Gramophone Magazine as “meltingly beautiful”. She also sang Nannetta for Opéra d’Angers-Nantes.

Amanda Forsythe made her USA stage début with Boston Early Music Festival, where her roles have included Niobe and Manto (recording) in Niobe, regina di Tebe, Aglaure in Lully’s Psyché, Venus Venus and Adonis (John Blow), Drusilla L’incoronazione di Poppea, Pallas in Eccles’ The Judgment of Paris and Edilia in Handel’s Almira, for which she received rave reviews.

Amanda Forsythe created the role of Young Margarta/Nuria in Osvaldo Golijov’s Ainadamar, a role which she later repeated with the Los Angeles Philharmonic and the Calgary Philharmonic. She also received high critical acclaim for her début as The Angel in the North American première of Peter Eötvös’ opera, Angels in America. She has also sung world premières by John Austin and Elena Ruehr, and recorded songs by the composer Ken Sullivan.

Amanda Forsythe’s concert engagements in North America have included her recent débuts at the Tanglewood Festival and Lincoln Center in the title role of Teseo with Philharmonia Baroque, and her début with Seattle Symphony in Handel’s Messiah. Other highlights have included Dorinda Orlando and Handel’s Il trionfo del tempo with Early Music Vancouver, Dafne Apollo e Dafne with Pacific Musicworks, and Haydn and Mozart arias with Apollo’s Fire, Handel arias with Portland Baroque Orchestra, Mozart’s Mass in C Minor with the Handel and Haydn Society, and Haydn’s Creation and Messiah with the Charlotte Symphony.

Amanda Forsythe recently made her début at Seattle Opera as Iris Semele which resulted in an immediate invitation to return to sing Pamina Die Zauberflöte in 2017. In the Autumn she returns to the Royal Opera House, Covent Garden, as Amour in Gluck’s Orfeo under Sir John Eliot Gardiner, a role she then repeats in concerts with the Monteverdi Choir and Orchestra, before returning to the Accademia Nazionale di Santa Cecilia to sing the role of Marzelline in concert performances of Fidelio. She also recently sang Poppea Agrippina for Boston Baroque. She sings Poppea L’incoronazione di Poppea, Giunone Il Ritorno d’Ulisse, and the Monteverdi Vespers for the 2015 Boston Early Music Festival.

On the concert platform, Amanda Forsythe recently made her début with the Accademia Nazionale di Santa Cecilia in Rome in performances of Bach Magnificat under Sir Antonio Pappano. In January 2016 she makes her début with The Boston Symphony under Andris Nelsons in Mendelssohn’s A Midsummer Night’s Dream, following a tour of Mozart Requiem and Mass in C minor with the Monteverdi Choir and Orchestra under Sir John Eliot Gardiner. Other forthcoming concert engagements include Messiah with Philharmonia Baroque and Kansas City Symphony, Bach Cantata 51 and Vivaldi’s Gloria with Seattle Symphony, Handel and Vivaldi Concert arias and performances and a recording of Bach St John Passion with Apollo’s Fire.

In Autumn 2015 her début solo recording of Handel arias with Apollo’s Fire will be released on the Avie label.