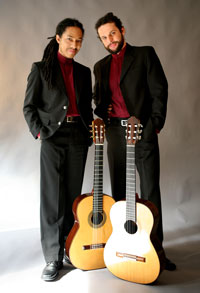 “The maturity of musicianship and technical virtuosity … is simply outstanding,” is how Classical Guitar magazine described the Brasil Guitar Duo, winner of the 2006 Concert Artists Guild (CAG) International Competition. Equally at home on a classical or a world music series, the Duo’s programming features both traditional and Brazilian works, as heard in performance and recordings alike.

In the US, the Brasil Guitar Duo has performed at such venues as Carnegie Hall’s Weill Recital Hall, Orange County (CA) Performing Arts Center, the Classical Guitar Societies of New York, St. Louis, Dallas/Ft. Worth and Tucson, and Guitar Festivals of Miami and Santa Barbara. Internationally they have toured in the UK, Korea and Brazil. A favourite of summer festivals, the Duo has appeared at the Aspen and Grand Teton Music Festivals, among others.

The Brasil Guitar Duo has recorded the complete works for two guitars by Castelnuovo-Tedesco for the Naxos label. The Duo’s first CD, Bom Partido, of all-Brazilian repertoire, was released on CAG Records.

Advocates for both traditional and new concerti, the Duo has performed with the Dallas and Houston Symphony Orchestras, Dayton Philharmonic, Lancaster Symphony (OH) and Philharmonic Orchestra of the Americas.

João Luiz and Douglas Lora met in São Paulo as teenage guitar students and after performing together for more than ten years, have perfected a sublime synchronicity and effortless performance style. The ensemble’s primary studies were with Henrique Pinto along with Fabio Zanon, Paulo Martelli, Sergio Abreu and Alice Artz. Douglas Lora completed a Master’s degree at the University of Miami as a student of Dr. Rene Gonzalez. João Luiz is a member of the guitar quartet Quaternaglia.