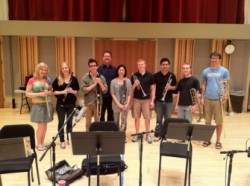 The Eastman Wind Ensemble is America’s leading wind ensemble. Frederick Fennell first formulated the general concept of the wind ensemble at Eastman more than 50 years ago. Under his leadership the group became the pioneering force in the symphonic wind band movement in the United States and abroad. A. Clyde Roller served as conductor between 1962 and 1964, continuing the tradition established by Fennell. Donald Hunsberger became conductor in 1965 and led the ensemble for 37 years to international prominence. The ensemble’s current director, Mark Davis Scatterday, was introduced during the EWE’s 50th anniversary celebration on 8 February 2002.

The EWE has been in the forefront of elevating the wind repertory through recordings. Fennell’s Mercury ‘Living Presence’ albums of the 1950s and early ’60s focused on standard band literature by the most respected classical composers and on major repertory not found on traditional band programs, by such composers as Hindemith, Schoenberg, and Stravinsky. Under Hunsberger, the EWE recorded on the Deutsche Grammophon, Phillips, CBS Masterworks (now Sony Classical), Toshiba EMI, Tioch (now KEF), Vox, Centaur, and Desto labels. Carnival, with Wynton Marsalis, was nominated for a Grammy® Award in 1987. The EWE’s recent recordings include concertos by Dana Wilson, Eric Ewazen, and Jacques Hétu with soloist James Thompson (Summit Records, 2005) and Manhattan Music (Opening Day, 2008) with the Canadian Brass, which was nominated for a 2009 Canadian Juno Award. The EWE has premiered more than 150 new works, made major national tours, and several important tours of Japan and the Far East under Donald Hunsberger and Mark Scatterday.