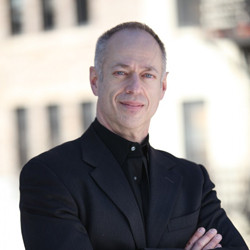 Acknowledged by The New York Times for his “extraordinary virtuosity,” and by BBC Music Magazine for his “first-rate flute playing,” Jeffrey Khaner is one of today’s most distinguished orchestral musicians. Principal Flute of the Philadelphia Orchestra since 1990, a post he held previously with the Cleveland Orchestra, he has won numerous accolades for his silvery tone, soaring phrases, remarkable breath control and nimble virtuosity.

A noted soloist, Jeff has performed concerti ranging from Bach and Mozart, to Neilsen, Ibert and Corigliano, among others. He has worked with such conductors as Riccardo Chailly, Charles Dutoit, Christoph Eschenbach, Claus-Peter Flor, Erich Leinsdorf, Kurt Masur, Wolfgang Sawallisch, Franz Welser-Most, and David Zinman. An enthusiastic supporter of new music, in December 2003 he gave the world premiere of a concerto written specially for him by Ned Rorem. He performed the American premiere of Hans Werner Henze’s Sentiments of CPE Bach for flute and harp with the composer conducting, and collaborated with Lowell Liebermann in performances of his Flute Sonata at the 2000 Saratoga Festival and in Japan at the Pacific Music Festival. Jeff sponsors an annual composition competition for students of the Curtis Institute of Music in Philadelphia, which has resulted in several new commissions.

Jeff was described as “a major player” by MusicWeb, reviewing his debut solo recording, American Flute Music, on the Avie label. He garnered an Editor’s Choice from The Gramophone for his most recent release, featuring his own arrangements of Brahms’ Clarinet Sonatas and a pair of Romances by Clara and Robert Schumann. He has released two other enterprising and critically acclaimed CDs on Avie: British Flute Music and French Flute Music.

Jeff made his debut at Carnegie Hall’s Weill Recital Hall in 2000 with pianist Charles Abramovic. In the same season he appeared in recital with Wolfgang Sawallisch in Philadelphia’s Convention Center. Jeff has concertized and taught throughout North and South America, Europe and Asia. He is a founding member, with fellow Philadelphia principals violist Roberto Diaz and harpist Elizabeth Hainen de Peters, of the Syrinx Trio, which made their debut in 2001 at Weill Recital Hall.

Committed to music education and promoting young musicians, Jeff is a faculty member of The Juilliard School and of Curtis Institute of Music in Philadelphia. Jeff has participated as a performer and teacher at the Solti Orchestral Project in Carnegie Hall, the New World Symphony, the Hamamatsu Festival, the Grand Teton Festival and the Sarasota Music Festival. He regularly appears at the Pacific Music Festival, where in 2002 he performed John Corigliano’s Pied Piper Fantasy. Jeff was selected by Sir Georg Solti to be principal flute of the World Orchestra for Peace celebrating the 50th anniversary of the United Nations.
Jeff is a Yamaha performing artist and clinician. He welcomes comments and questions on his website, https://iflute.com.