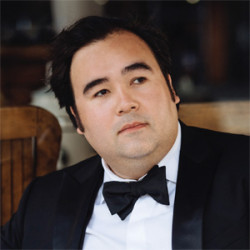 Tenor John Matthew Myers, declared an ‘artist to watch’ by Opera News, has rapidly established himself as one of today’s exceptional young voices. He has collaborated with companies such as the New York Philharmonic, Verbier Festival, Santa Fe Opera and LA Opera; he made his surprise Los Angeles Philharmonic debut in 2017 as Mao in John Adams’s Nixon in China conducted by the composer. In recent seasons Myers has appeared at the Metropolitan Opera covering roles in Tchaikovsky’s Queen of Spades, Strauss’s Der Rosenkavalier, Mussorgsky’s Boris Godunov and Wagner’s Die Meistersinger, and in May 2022 he will be making his debut there in Brett Dean’s Hamlet.

Myers made his New York Philharmonic debut in the 2018/19 season in the world premiere of David Lang’s fully staged opera prisoner of the state. Directed by Elkhanah Pulitzer, prisoner of the state was released as an album on the Decca Gold label in June 2020. That same season, Myers returned to the LA Phil to participate in a new production of John Cage’s Europeras 1 & 2 in collaboration with The Industry and under the direction of Yuval Sharon. Further operatic debuts include the Teatro Regio di Parma (2022) and l’Opéra de Paris (2023).

Originally from southern California, Myers received his graduate and undergraduate degrees from the Manhattan School of Music, was a Gerdine Young Artist with the Opera Theatre of Saint Louis, Apprentice Artist with the Santa Fe Opera, an alumnus of the Verbier Festival Academy, and a fellow with the Music Academy of the West.