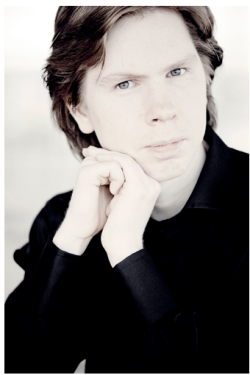 Celebrated as one of Finland’s most outstanding pianists, Juho Pohjonen is widely praised for his profound musicianship and distinctive interpretations of a broad range of repertoire from Bach to Salonen. His interpretations are known for their intensity, thoughtfulness, and fearless musical conviction. He has appeared with the Cleveland Orchestra, Los Angeles Philharmonic, San Francisco, Baltimore, Vancouver, Atlanta and Buffalo symphonies. European engagements include Tonhalle-Orchester Zürich, Philharmonia Orchestra, Danish National, Finnish Radio, Swedish Radio symphonies and the Lahti Symphony, with which he toured Japan.

Juho Pohjonen’s studies began in 1989 when he entered the Junior Academy of the Sibelius Academy, Helsinki. He studied with Meri Louhos and Hui-Ying Liu-Tawaststjerna at the Sibelius Academy where he completed his Master’s Degree in 2008. Pohjonen has also participated in several master classes of world-class pianists such as Sir András Schiff and Leon Fleisher.