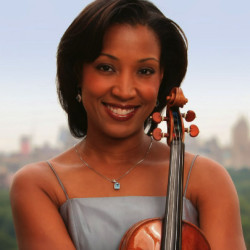 Kelly Hall-Tompkins is the winner of a Naumburg International Violin Competition Honorarium Prize, a Concert Artists Guild Career Grant, a Sphinx Medal of Excellence, and is featured in the Smithsonian Museum for African-American History. She is a trailblazing and innovative violin soloist entrepreneur who has been acclaimed by the New York Times as ‘the versatile violinist who makes the music come alive,’ for her ‘tonal mastery’ (BBC Music Magazine) and as New York Times ‘New Yorker of the Year.’ She has appeared as co-soloist at Carnegie Hall with Glenn Dicterow under Leonard Slatkin, at Queen Elizabeth Hall in London with Michael Morgan, at Lincoln Center, as the Inaugural Artist in Residence and soloist with the Cincinnati Symphony, and with the Symphonies of Baltimore, Dallas, Jacksonville, Oakland and Greensboro. She has played at recitals in Paris, New York, Toronto, Washington, Chicago, at Tanglewood, Ravinia, Santa Fe and Gateways, and in France, Germany and Italy. At home with genres beyond classical music, she was the first soloist to perform the Wynton Marsalis Violin Concerto after the original dedicatée and toured for 5 years with Mark O’Connor. She was ‘Fiddler’/violin soloist in the Grammy/Tony-nominated Broadway production of Fiddler on the Roof, which inspired her to commission and develop the first-ever Fiddler solo disc of all new arrangements, The Fiddler Expanding Tradition, which is featured alongside her recital in Kiev, Ukraine in the documentary Fiddler: A Miracle of Miracles on the 55-year history of the musical. Ms. Hall-Tompkins’ Imagination Project was called ‘groundbreaking’ by Strings Magazine and has received over one million views on YouTube. Performing online throughout the pandemic, her numerous projects include premiering 4 pieces written for her; creating and being invited to unique collaborations, including a new co-composition with Tony-nominated actor Daniel J. Watts, Echo: Shostakovich in Catharsis with aerial dancer Alexandra Peter and Frisson Films; Gil Shaham’s Gilharmonic, and with WQXR as part of the inaugural Artist Propulsion Lab. As founder of Music Kitchen, Kelly Hall-Tompkins is a pioneer of social justice in classical music, bringing top artists in over 100 concerts in homeless shelters coast to coast from New York to Los Angeles, and internationally in Paris, France. Ms. Hall-Tompkins is on the faculty of the Manhattan School of Music and also a contributing author to Music and Human Rights on Routledge Press.