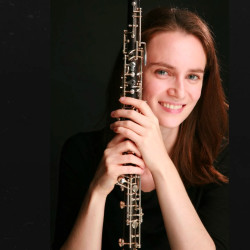 Hailed as ‘the star of the evening’ by The Philadelphia Inquirer and praised for her ‘wistful and evocative’ playing by The Seattle Times, Mary Lynch VanderKolk has been principal oboe of the Seattle Symphony Orchestra since 2014. She began her career as second oboe with The Cleveland Orchestra and has performed as guest principal with the Los Angeles Philharmonic, San Francisco Symphony, Chicago Symphony Orchestra, and the Norwegian Radio Orchestra. Since the start of her tenure in Seattle, she has performed frequently as soloist with the Seattle Symphony, including a collaboration with Itzhak Perlman in Bach’s Concerto for violin and oboe BWV 1060R. Deeply passionate about performing music of our time and expanding the repertoire for her instrument, she recently premiered Reena Esmail’s RE|member for solo oboe and orchestra. Her growing list of solo recordings include the premiere recordings of three concertos: the Oboe Concerto by Marc-André Dalbavie (Seattle Symphony Media) and the Oboe and Oboe d’amore Concertos by Christopher Tyler Nickel (Avie Records).

An avid chamber musician, Ms. Lynch VanderKolk has spent many summers at the Marlboro Music Festival, has toured with Musicians from Marlboro, and performs regularly with the Newport Music Festival (Rhode Island) and the Seattle and Philadelphia Chamber Music Societies. One of her great musical joys is performing Bach cantatas every year with the Gamut Bach Ensemble in Philadelphia. Additional summer festival appearances include the Oregon Bach Festival, Weimar Bach Academy, and the La Jolla SummerFest. Her chamber music performances have been enthusiastically reviewed and broadcast on radio stations around the world, including on American Public Media’s Performance Today. She can also be heard on the Seattle Symphony label performing Dutilleux’s Les Citations for oboe, harpsichord, bass, and percussion.

Ms. Lynch VanderKolk earned her BM and MM degrees at New England Conservatory and The Juilliard School respectively, studying with John Ferrillo, Elaine Douvas, and Nathan Hughes. Upon graduating from Juilliard, she was awarded the prestigious William Schuman Prize for outstanding achievement and leadership in music. She is also a graduate of Interlochen Arts Academy, where she studied with Daniel Stolper. Now a devoted teacher herself, she serves on the University of Washington faculty and has presented masterclasses at The Juilliard School, San Francisco Conservatory, University of Maryland’s National Orchestral Institute, Interlochen Arts Camp, and the University of British Columbia, among many other institutions.