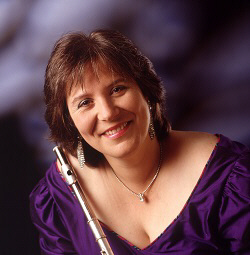 Philippa Davies has established an international reputation as one of Britain’s finest flautists. She has received universal plaudits for her many concerto- and recital performances and has been praised for her gifted musicianship and warm personality. A ‘first-rate virtuoso’ with ‘exceptional eloquence’, she has been noted for an ‘almost electrical response to technique’. As a recitalist, Philippa performs and broadcasts throughout the world at international festivals from Delft to Kuhmo. She gives master-classes and recitals as far afield as China and the USA. She has performed concertos with the BBC Symphony Orchestra and the BBC National Orchestra of Wales, the English Chamber Orchestra, City of London Sinfonia, the London Mozart Players and the New Stockholm Chamber Orchestra.

She began her career as principal flute with the National Youth Orchestra of Great Britain, and gained a scholarship to London’s Royal College of Music where she studied with Douglas Whittaker and William Bennett and won many prizes. She made her debut in the 1977 BBC Proms, returning in 1988 with a highly successful performance of the Mozart D major Concerto. Her duo partnerships are with Maggie Cole (harpsichord), Bryn Lewis (harp), John Lenehan, Julius Drake and Ian Brown (piano). She has also appeared regularly with Marisa Robles, Julian Bream, Pascal Rogé, Barry Douglas, Yo Yo Ma and Stephen Kovacevich.

Philippa is a Professor at The Guildhall School of Music in London.