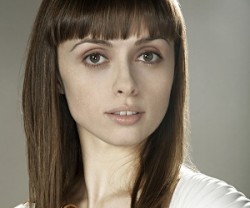 Violinist Ruth Palmer brings glamour and engagement to the concert stage and is fast developing an international reputation for her intense physical performances, deeply sonorous sound and championing of new music. She won the Young British Classical Performer 2007 award at the Classical BRITs.

Ruth has worked frequently with some of Britain’s leading choreographers and dancers. In 2004/5 she toured as a soloist with Rambert Dance Company performing to over 50,000 people around the country to critical acclaim.

Prizes have included 2nd and 3rd Prizes at the Premio Sassari International Violin Competition, The RAM “Roth Prize’, The RAM Lesley Alexander Award for excellence in violin playing, the ‘Star’ award from the Countess of Munster Musical Trust, awards from the Musicians Benevolent Fund, the Myra Hess Trust, the Emanuel Hurwitz award from the Philharmonia Orchestra/Martin Musical Scholarship Fund and an Allcard Award from the Worshipful Company of Musicians.

As a student at Royal College of Music Ruth’s teacher was Dr. Felix Andrievsky. In 2005 Ruth was made the first ever recipient of the prestigious Ritterman Junior Fellowship at the RCM, having previously been the Mills Williams Junior Fellow in 2004.