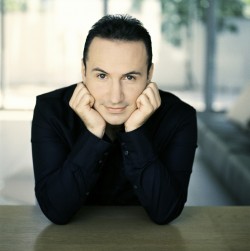 A superb recitalist, Simon Trpčeski has given solo concerts in Amsterdam (on the main stage of the Concertgebouw), Atlanta, Bilbao, Hamburg, London, Milan, Munich, New York, Paris, Prague, San Francisco, Seattle, Tokyo, Toronto and Vancouver. Simon also performs chamber music as often as he can, having attended festivals such as Aspen and Risor, and working regularly with young musicians in Macedonia.

He has received much praise for his EMI recital recordings; the first, featuring works by Tchaikovsky, Scriabin, Stravinsky and Prokofiev, received both the Editor’s Choice and Debut Album Awards at the Gramophone Awards. Subsequent discs of Rachmaninov and Chopin were equally well received, and in 2008 he released an all-Debussy disc to widespread critical acclaim.

Born in the Republic of Macedonia in 1979, Simon Trpčeski has won prizes in international piano competitions in the UK, Czech Republic and Italy, and was awarded the ‘Young Artist Award’ by the Royal Philharmonic Society in 2003. A 2002 graduate from the Faculty of Music of the University of St. Cyril and St. Methodius in Skopje, where he studied with Professor Boris Romanov, Simon currently teaches as a faculty member at his alma mater.