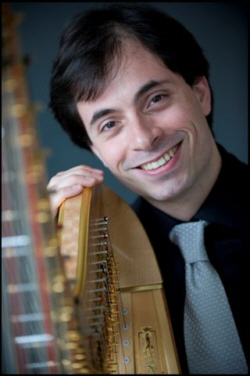 Harpist, Sivan Magen, is the only Israeli to have ever won the prestigious International Harp Contest in Israel. A winner of the Pro Musicis International Award, he is also the 2012 Award Winner of the Borletti-Buitoni Trust – the first harpist to have been awarded that honour. Recent performances include recital debuts in Carnegie’s Weill Hall and London’s Wigmore Hall and solo appearances in the US, South America, Europe and Israel including the world premiere of Haim Permont’s ‘Aviv’ concerto with the Israel Philharmonic. A founding member of the Israeli Chamber Project, Mr Magen is an avid chamber musician and has appeared in Paris (Salle Gaveau), NY (Alice Tully Hall, the Metropolitan Museum, Bargemusic), with Musicians from Marlboro, and at the Marlboro, Kuhmo, Giverny and Jerusalem International Chamber Music festivals. The 2011–12 season marked the debut of his new trio with flautist Marina Piccinini and violist Kim Kashkashian.

He has recorded for the Koch, Avie and Azica labels, Israeli Radio and Television, New York’s WQXR, APM’s Performance Today and the French television channel Mezzo. His performance of Ravel’s Introduction and Allegro is featured on Marlboro’s 60th Anniversary CD.