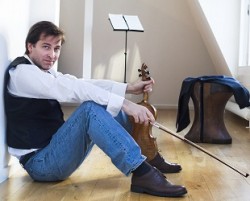 Violinist Philippe Graffin has established an indisputable reputation for his interpretations of the French repertoire, natural perhaps for one of the few pupils of Josef Gingold, himself a pupil of Ysaÿe for whom most of the violin repertoire of this era was written.

Philippe made his first recording with Yehudi Menuhin conducting the Royal Philharmonic Orchestra and his many highly acclaimed recordings since then bear witness to a questing mind and include many world premieres. He has rediscovered original settings of Chausson’s Poème and Ravel’s Tzigane and has championed the forgotten violin concertos of Fauré and the English composer Coleridge-Taylor, which he has recorded and performed at the BBC Proms.

Graffin performs works of many living composers and has had works written for him by Rodion Shchedrin, Vytautas Barkaukas, David Matthews, Philippe Hersant, Yves Prin, Peter Fribbins and Marcelo Nisinman. He was the founder and artistic director of “Consonances”, a chamber music festival held in St Nazaire, France, from 1990-2015. He has curated numerous projects at the Wigmore Hall, London, including a week-long festival devoted to Ysaÿe and his influences.

Philippe has shared the stage with some of the great artistic personalities of our time, from Lord Menuhin and Mstislav Rostropovich, to the actor Gerard Depardieu, with whom he created a project in Brussels, at Flagey, exploring the relationship between poetry and music, recorded and documented by Belgian Television RTBF. In September 2017 Graffin curated ‘Ysaÿe’s Knokke’, a festival in Knokke le Zout, where the great Belgian violinist Ysaÿe had his summer residence and in 2018 he curated the Ysaÿe Festival of Japan.

His discography of over thirty CDs includes the three Saint-Saëns concertos, world-première recordings of concertos by Samuel Coleridge-Taylor, Frederic Cliffe, Frédéric d’Erlanger, Philippe Gaubert, Joseph Jongen and Tauno Marttinen. A champion of British repertoire Philippe has also recorded the violin concertos of Britten, Delius, Elgar and David Matthews as well as the works written for him by Barkauskas, Prin and Shchedrin. His recording of the Tchaikovsky concerto is the first with the cadenza written by Ysaÿe and he has also recorded the complete Ysaÿe sonatas.

Philippe Graffin is a professor at the Paris Conservatoire National Supérieur de Musique (CNSM) and at the Brussels Conservatoire Royal. He has a long-standing musical partnership with Claire Désert and together they have recorded several CDs including In the Shade of Forests, an earlier CD of Debussy, Ravel and Enescu for Avie Records.