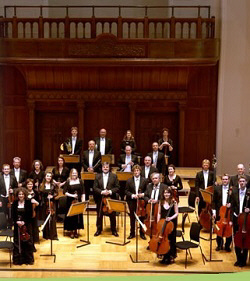 The ECO’s illustrious history features many major musical figures, including Benjamin Britten, who was the orchestra’s first Patron and a significant musical influence. The orchestra’s long relationship with such great musicians as Slava Rostropovich, Pinchas Zukerman, and earlier with Daniel Barenboim led to an acclaimed complete cycle of Mozart piano concertos as live performances and recordings, followed later by two further recordings of the complete cycle, with Murray Perahia and Mitsuko Uchida. The orchestra’s film and TV work includes recording Dario Marianelli’s prizewinning scores for Atonement and Pride and Prejudice and several James Bond soundtracks. Under the patronage of HRH The Prince of Wales, the ECO has performed at many royal events, including the first concert ever to be broadcast from Buckingham Palace. The ECO continues to build upon its tradition of maintaining the highest international musical standards, nurturing new talent and focussing on the ‘best of British’ music and musicianship, as well as being the chamber orchestra of choice for many of the world’s greatest soloists. www.englishchamberorchestra.co.uk