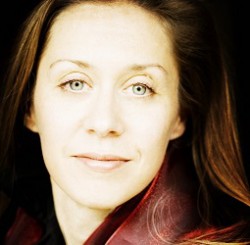 Flutist Marina Piccinini is widely recognized as one of the world’s leading flute virtuosos. She combines flawless technical command, profound interpretive instincts, and a charismatic stage presence — qualities which make each of her performances a memorable event.

Since making her acclaimed debuts in New York’s Town Hall, London’s Southbank Centre, and Tokyo’s Suntory Hall, Ms. Piccinini has been in demand both as a recitalist and soloist with orchestras in the United States, Canada, Europe, and Japan. She has been soloist with the the Boston Symphony Orchestra, the Tokyo Symphony, St. Paul Chamber Orchestra, Montreal Symphony, Calgary Philharmonic, Saint Louis Symphony , Minnesota Orchestra, Ottawa’s National Arts Centre Orchestra; the Hannover Symphony in Germany and the Ravenna Chamber Orchestra in Italy; and the Cincinnati, New World, Toronto, Vancouver, Phoenix, Tucson, and Milwaukee symphony orchestras, among others. Ms. Piccinini also performs with great frequency in recitals worldwide, with recent appearances in London’s Wigmore Hall, Tokyo`s Casals Hall and the Kennedy Center in Washington, DC.

Recent seasons have been highlighted by significant world premiere performances: Michael Colgrass’ Crossworlds for Flute, Piano, and Orchestra, with pianist Andreas Haefliger and the Boston Symphony Orchestra under Hans Graf, and the Gran Danzon for Flute and Orchestra by the Cuban composer and jazz saxophonist Paquito D’Rivera with the National Symphony under Leonard Slatkin. Subsequent performances of Crossworlds have been with the Winnipeg Symphony (Matthias Bamert), the National Symphony (Hugh Wolff), and the Montreal Symphony (Emmanuel Villaume). Further performances of Gran Danzon have been with the Saint Paul Chamber Orchestra (HK Gruber), the Milwaukee Symphony (Peter Oundjian) as well as the Rotterdam Philharmonic (Gianandrea Noseda). Upcoming commissions include new concerti by the Australian Matthew Hindson with the London Philharmonic and by Brazilian composer Miguel Kertsman with the Vienna Chamber Soloists.

A frequent guest artist in Japan, Ms. Piccinini appeared with noted pianist Mitsuko Uchida in a series of chamber concerts, including Suntory Hall in Tokyo and again in Weill Recital Hall and in the new Zankel Hall at Carnegie Hall In New York.

A devoted chamber musician, Marina Piccinini has collaborated with the Tokyo, Brentano, Mendelssohn, and Takács string quartets and with the Percussion ensemble Nexus. Ms. Piccinini is a regular participant at major summer festivals, including the Marlboro Festival, Mostly Mozart, , Santa Fe, Spoleto (Italy), La Jolla, Newport, Davos, Tivoli, and Kuhmo and has toured on several occasions with Musicians from Marlboro. She has also performed (by personal invitation of Seiji Ozawa) at the Saito Kinen Festival in Japan.

Ms. Piccinini\’s recordings on the Claves label are “Belle Époque (Paris, 1880-1913)”, with pianist Anne Epperson, and a collaboration with pianist Eva Kupiec on a recording of Sonatas by Bartok, Martinu, Schulhoff, Dohnányi, and Taktakishvili. For Avie she has recorded the Sonatas of Prokofiev and Franck with pianist Andreas Haefliger.

Marina Piccinini’s career was launched when she won First Prize in the 1985 CBC Young Performers Competition in Canada, and a year later, First Prize in New York’s Concert Artists Guild International Competition. In 1989 she was cited by Musical America as a “Young Artist to Watch”, and in 1991 she became the first flutist to win a coveted Avery Fisher Career Grant from Lincoln Center. She has been the recepient of numerous awards and grants including twice the NEA‘s Solo Recitalist Grant, the McMeenSmith Award, the BP Artists Career Award, and various grants from the Canada Council. She was also the winner in the New York Flute Club competition and the National Arts Club Competition.

Ms. Piccinini began her flute studies in Toronto with Jeanne Baxtresser and received her BM and MM degrees from the Juilliard school where she studied with the legendary flutist Julius Baker. She also worked with Aurele Nicolet in Switzerland. Ms. Piccinini has taught master classes around the world and in September, 2001, joined the faculty of the Peabody Institute.