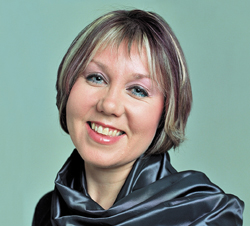 While still a student at the Guildhall School of Music and Drama, Mhairi won the International Early Music Network Young Artists Prize with the fortepianist Olga Tverskaya, which led to her first CD recording of Haydn’s English and Scottish Songs.

As a soloist Mhairi has sung worldwide with such companies as English National Opera, Les Arts Florissants, the Monteverdi Choir, the Early Opera Company, the Scottish Chamber Orchestra and the Academy of Ancient Music. She enjoys working in repertoire ranging from traditional folksong to Gilbert and Sullivan and contemporary commissions, and has made many commercial recordings, most recently Haydn’s Creation with the Choir of New College, Oxford, conducted by Edward Higginbottom, and Scottish Jacobite Songs on the Avison Ensemble’s CD Rebellion.

With the virtuoso baroque band La Serenissima, Mhairi has recorded many of Vivaldi’s sacred and operatic works and with them has performed large-scale pieces including La Senna festeggiante, La fida ninfa, Catone in Utica and L’Olimpiade in Venice.

Mhairi has worked with the Gabrieli Consort and Players for many years and projects with them include Bach’s St John and St Matthew Passions, the B minor Mass and the Wedding Cantata, Handel’s’ Jephtha, Acis and Galatea and La resurrezione, and Purcell’s Dido and Aeneas, King Arthur and The Fairy Queen.

On the operatic stage Mhairi has sung the roles of Cupid, Honour and Venus in Purcell’s King Arthur with the Mark Morris Dance Group’s production at New York City Opera, conducted by Jane Glover, in which she also appeared at English National Opera and with the Philharmonia Baroque Orchestra in Berkeley, California. At the Buxton Festival, she sang the role of Dorinda in Handel’s Orlando conducted by Christian Curnyn, for Opera Theatre Company. Roles at English National Opera include Drusilla in Monteverdi’s Coronation of Poppea and Sister Genevieve in Puccini’s Suor Angelica. She has also sung the role of Aminta in La Serenissima’s production of Vivaldi’s L’Olimpiade.